A Word On Gauge & Scale

A Word on Gauge & Scale 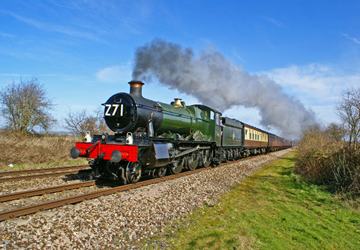 The term "Scale" means the ratio of reduction used to make a model of the real prototype. The term "O Scale" means that the model is 1/48th the actual size of the real article. This also works out to be ¼" on a model is equal to 1' on the real thing. The letters such as "O," "HO," "S," etc. are letter designators that were assigned to a scale or ratio by the specific manufacturers in the early 1900s. While these manufacture's track width was to scale, their early models were not true scale models but toy trains that were generally fashioned to look like the real thing. Given the variability in models, it was more consistent to refer to the different sizes of track as a reference and use the lettered scale designator. Hence the term "O Gauge" evolved. Thus, strictly speaking, there is no such thing as an O Gauge structure, figure, automobile or train.

Now it gets complicated. O Gauge is not a scale, but the term is used to define O Scale trains as well as toy trains that run on track that is 1.25" between the outside rails (5 scale feet). Most toy train track also has three rails and is often referred to as "Hi Rail." Lionel was the predominant manufacturer of pre World War II O Gauge toy trains and thus set the industry standards.

In the thirties Lionel put out a less expensive line of trains for the beginners (mainly children), and they referred to this as O-27 Gauge. This gauge had nothing to do with a scale but defined the diameter of a circle of track that this group of trains would run on. The O-27 track would actually make a full circle on a surface that measured 27 ½ inches wide. The diameter of the track is measured from the outside edge of the outside rails of a full circle of track. The toy trains that ran on this track had the same wheel gauge but were smaller in size so they could make a tighter turn.

These O-27 trains could also operate on the bigger diameter O gauge track, which has a slightly higher profile and comes in different diameters: O-31, O-42, O-48, O-54, O-72, etc. O Gauge (Hi-Rail) track and switches were produced by Lionel and other manufacturers before World War II. This track was made of tin-plated steel with stamped metal crossties (three per section). This track had fixed diameters and was rigid.

The reason that diameters were used instead of radius to define a curve is because it was easier to understand. For instance O-48 track would fit on a board that was 4 feet wide (48") and O-72 track had to have a base of six feet (72"). The reason for many different sizes is so you can have independent concentric ovals and run a separate train on each. The most correct definition of O gauge as it has evolved today is as follows: It is term used to describe a group of toy trains that is roughly based on ¼" scale and runs on non-scale three rail track that is 1.25" between the outside rails. "O Gauge" and "High Rail" are synonymous. "O Scale" has become known as the proper term to be used for true ¼ inch scale models that operate on prototypical 2-rail track.

Standard Gauge (also known as No. 1 Gauge) is one of the first gauges used in the late1800s and early 1900s. It is very large and takes up a lot of space. Eventually the market demanded more prototypical trains, and the space requirements were just too big for practical use in an average home. Standard Gauge's popularity faded in the post World War II market. These trains are highly prized pieces in the collectors' market, and M.T.H. Electric Trains has had great success in making reproductions of these classic toy trains. In the late seventies Garden railroads were rediscovered in the United States, and Standard Gauge trains are back. Today you can find Standard Gauge or Number 1 Gauge trains alive and well in backyards all over the world.

AC Gilbert made S Gauge, 1/64 scale, popular in their postwar production of the American Flyer. The American Flyer had some higher-priced locomotives that were closer to scale than any other toy trains on the market at the time. AC Gilbert concentrated on realism, and the American Flyer S Gauge was the first two-rail electric train system widely marketed in the United States. AC Gilbert went out of business in the sixties. But the S Gauge lives on as a popular gauge for scale molders, scratch builders, and collectors.

HO Gauge is the most popular gauge in the world today. Both Lionel and American Flyer tried to go into the HO Gauge market and failed miserably. As a result, the precision scale modelers and scratch builders have exclusively dominated this particular gauge in the United States. These modelers are very particular about details and true scale models, and they want to operate trains as if they were on a real railroad. HO is the ideal scale to do all of these. There is a HO precision true-to-scale model for virtually every piece of railroad equipment ever produced in North America. Modelers in HO correctly refer to their trains and models as HO Scale models.