Are You the Rubber Band Man (or woman?)

Ever since rubber bands were invented, people have been shooting them at each other!  Whether it's wrapping it around your hand and using your thumb as the trigger or attaching that clothespin to a ruler, it was always a lot of fun.  Now Magnum Enterprises, LLC has taken the concept to a whole new level.  Made in the USA of wood, they can provide hours of mostly safe entertainment.  Please be careful.  Don't ever point it at someone who isn't wearing safety glasses, and leave your and your neighbors' pets alone!

We have the best selection of toy rubber band guns around. There are guns for cowboys, pirates, gangsters, soldiers, police, hunters and even SWAT teams. Our pistols, rifles and machine guns are excellent representations of actual guns – but of course, they're much safer, and they're loads of fun!

Some of our most popular rubber band guns include the Magnum 45 pistol, the AK-47 rifle, the M-16 Marauder rifle, the Colt 22 pistol, the Tommy Gun®, and the Devastator Gatling gun – which is well known as the most powerful rubber band gun in the world. The best part about our products is that they are American made.

We also carry other wooden toys such as Pop Guns, Sling Shots, Targets, and a varity of Wooden Swords and Axes.

Check them all out HERE, including ammuntion and other accessories.

They come in several varieties: 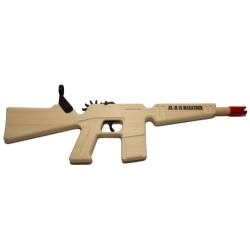 Military Pistols such as the Enforcer Pistol 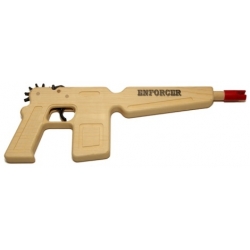 How about a nice Western Pistol? 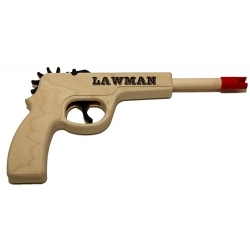 And of course, doesn't every collector NEED a Thompson Sub-machine Gun? 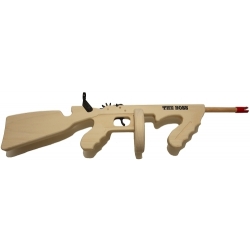 Check them all out HERE, including ammunition and other accessories.