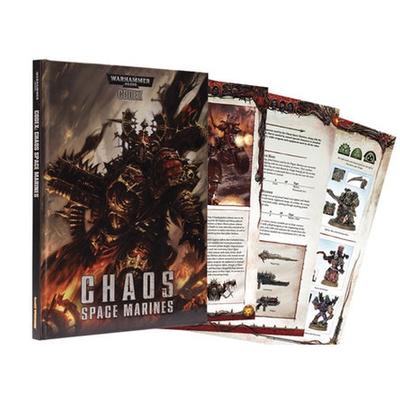 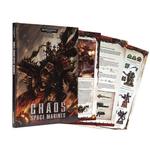 Death to the False Emperor!

Chaos Space Marines are corrupt and treacherous super-warriors hell-bent on tearing apart the Imperium. Though they once strode the galaxy as noble defenders of Mankind, a lifetime of unremitting war has driven them to worship the gods of Chaos. These fell deities have rewarded them with arcane powers, daemonic war marines and hellish weaponry with which to slaughter the armies of the Emperor.

The Codex contains information on how the Chaos Space Marines came to be the bane of their loyalist brethren, from the origins of the Horus Heresy, through to the Black Crusades and the Crimson Path. It also includes a description of, and rules for, the battle-hungry forces of the Chaos Space Marines, including a gatefold reference page. In addition to the jaw-dropping artwork within, there is a stunning showcase of the range of miniatures, presenting the colour schemes and iconography of the Traitor Legions and their Renegade allies.