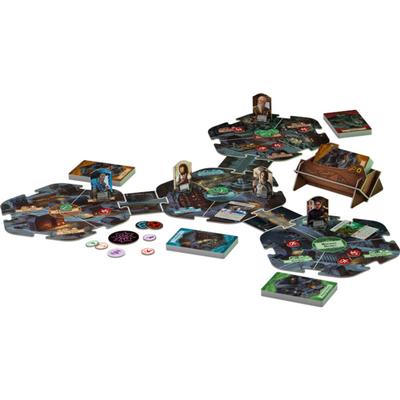 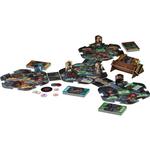 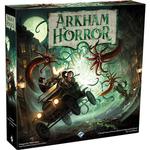 The year is 1926, it is the height of the Roaring Twenties. Flappers dance till dawn in smoke-filled speakeasies, drinking alcohol supplied by rum runners and the mob. It’s a celebration to end all celebrations in the aftermath of the War to End All Wars.

Yet a dark shadow grows in the city of Arkham. Alien entities known as Ancient Ones lurk in the emptiness beyond space and time, writhing at the thresholds between worlds. Occult rituals must be stopped and alien creatures destroyed before the Ancient Ones make our world their ruined dominion. Only a handful of investigators stand against the horror.

Arkham Horror Third Edition is a cooperative board game for one to six players who take on the roles of investigators trying to rid the world of eldritch beings known as Ancient Ones. Based on the works of H.P. Lovecraft, players will have to gather clues, defeat terrifying monsters, and find tools and allies if they are to stand any chance of defeating the creatures that dwell just beyond the veil of our reality.

Before you embark on your first game of Arkham Horror, you have choices to make as to how you will meet your doom, selecting a scenario and choosing an investigator to embody in the world of Arkham Horror. These investigators all receive unique starting items and have special abilities, giving them a distinct identity for your adventures. You may defeat evil with style and panache with the dilettante Jenny Barnes, or protect the streets of Arkham with police officer Tommy Muldoon. Players of Arkham Horror: The Card Game and Mansions of Madness will already be familiar with these investigators, as they are some of the most prolific heroes of the Arkham Horror Files!

A game of Arkham Horror Third Edition is split into a series of rounds. You and your fellow investigators won’t know how to win the game immediately - its not as simple as just closing gates to other worlds! Every scenario begins with archive cards that narratively propel the scenario and provide short-term goals for your investigators to accomplish. As more cards are added to the codex, the mystery begins to unravel, and the investigators just may discover a way to impede the darkness. But as with all games in the Arkham Horror Files, things never quite go according to plan. As doom spreads across the city, other cards will be added to the codex, cards that see the world inch ever-closer to being engulfed by the unknown. The spread of doom, the approach of an Ancient One, and even the investigators own choices can lead to new cards being added to the codex, making every turn vital to your success.

With a fully narrative approach and a branching path within each scenario, Arkham Horror has become a more thematic experience than ever before. As with other games in the Arkham Horror Files, researching clues will often be the key to victory. But this is not always the case, you can never be sure what your next goal will be, meaning you must quickly adapt to new plans.

A fully modular board composed of double-sided tiles makes every game of Arkham Horror Third Edition a different experience!