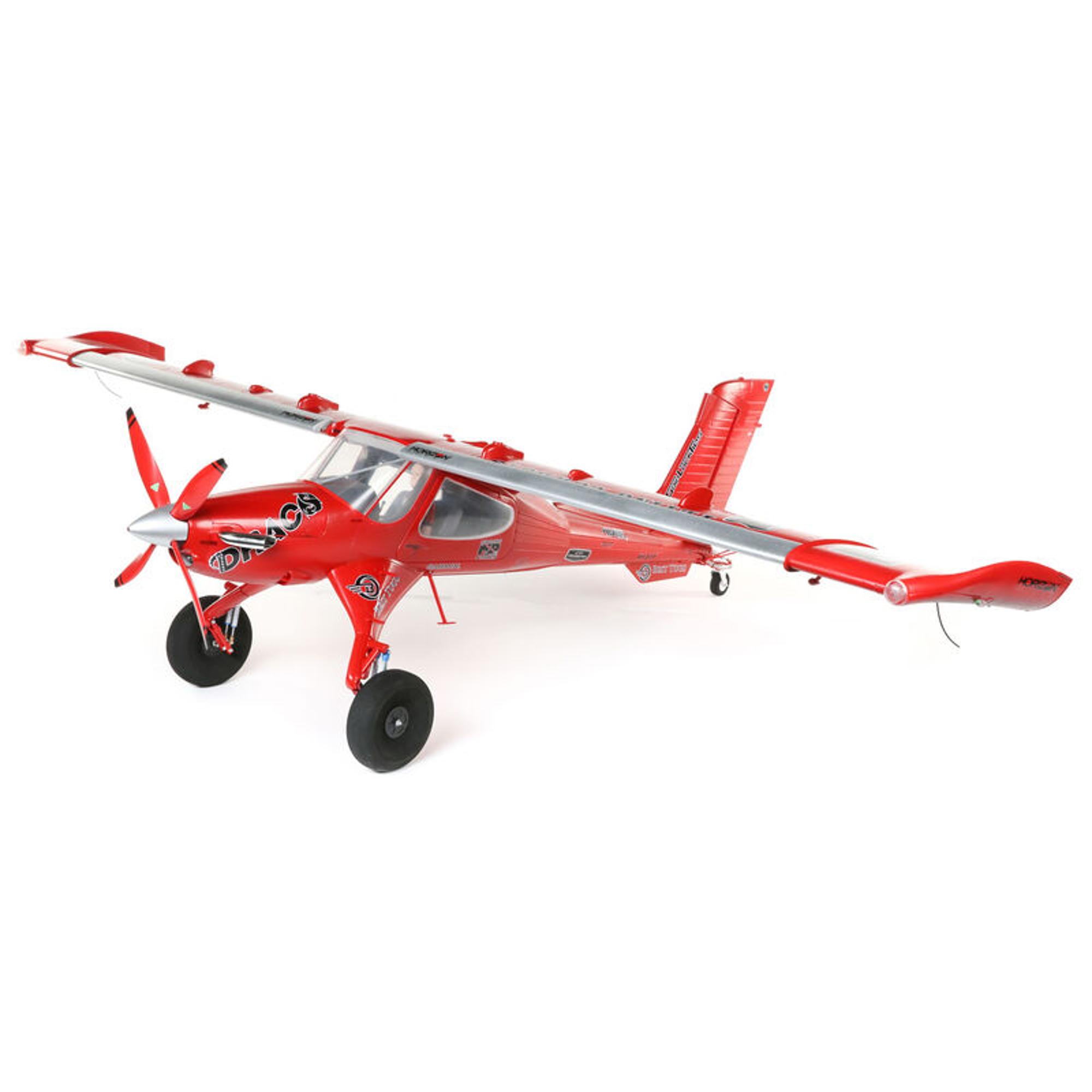 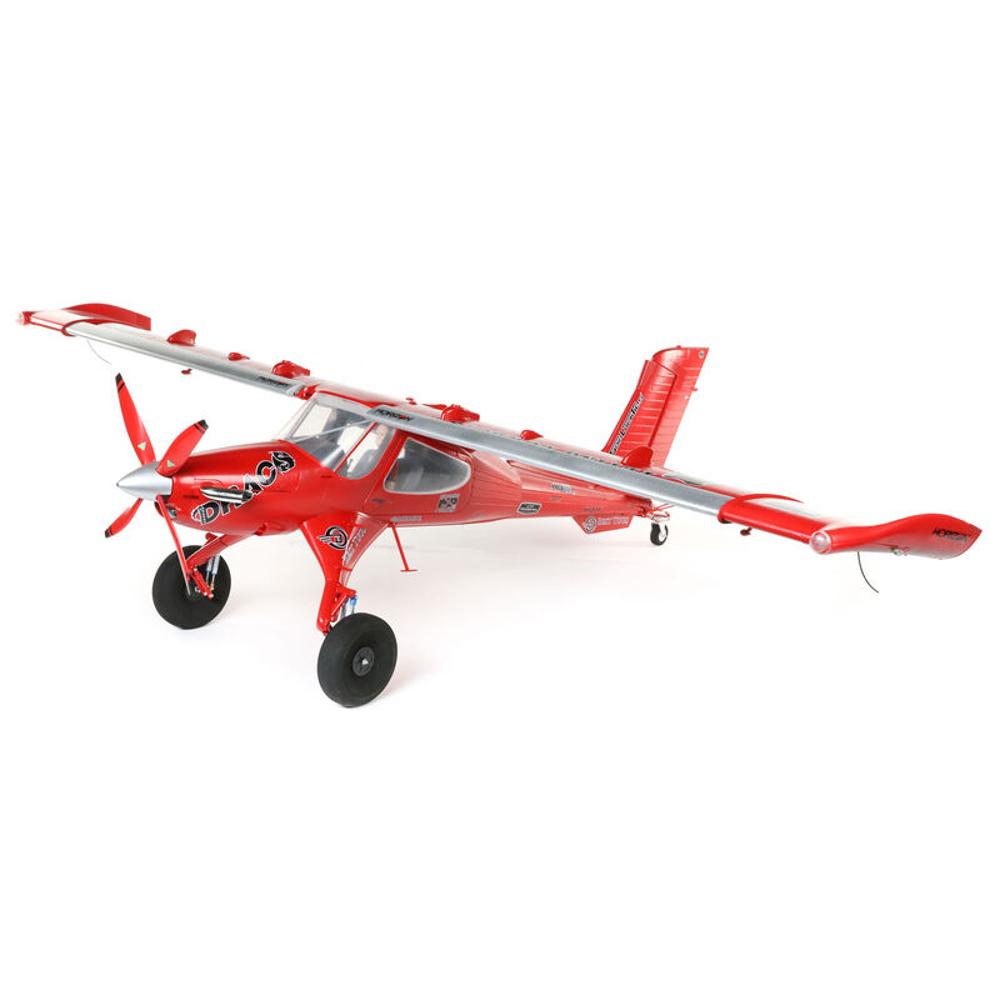 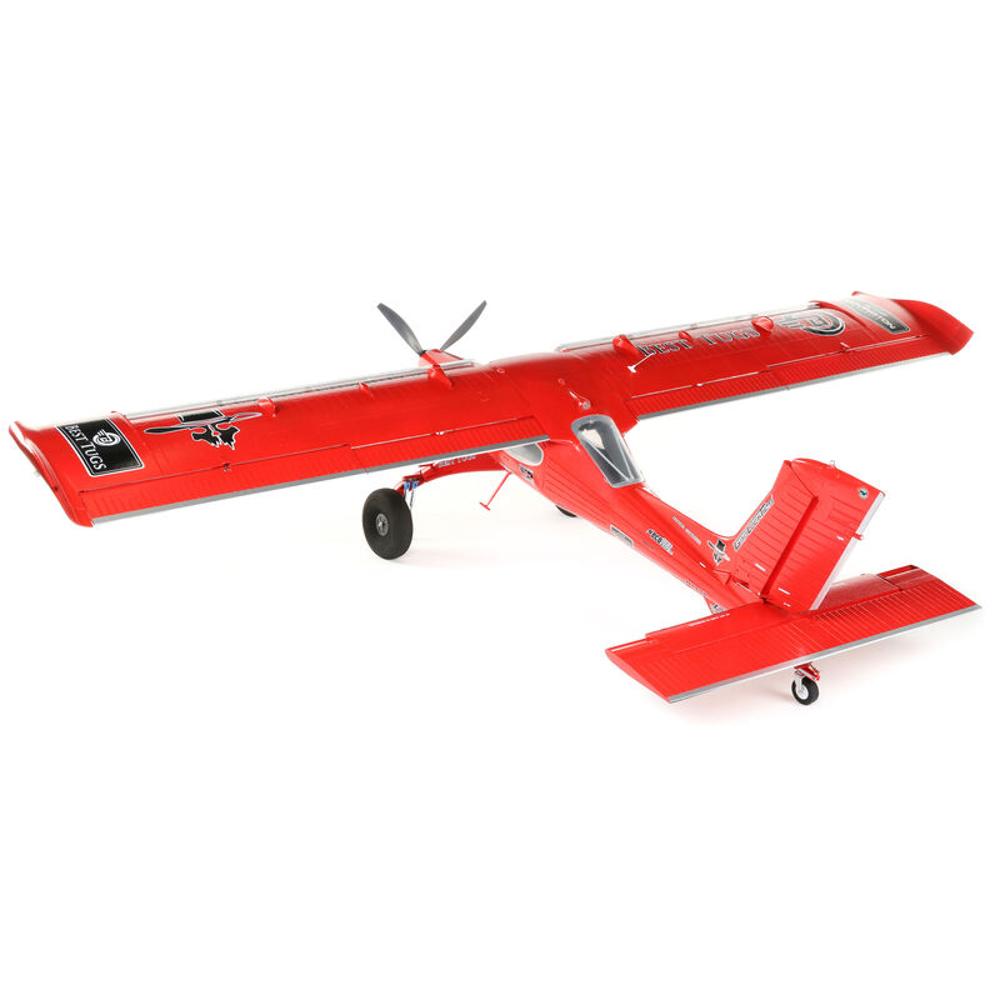 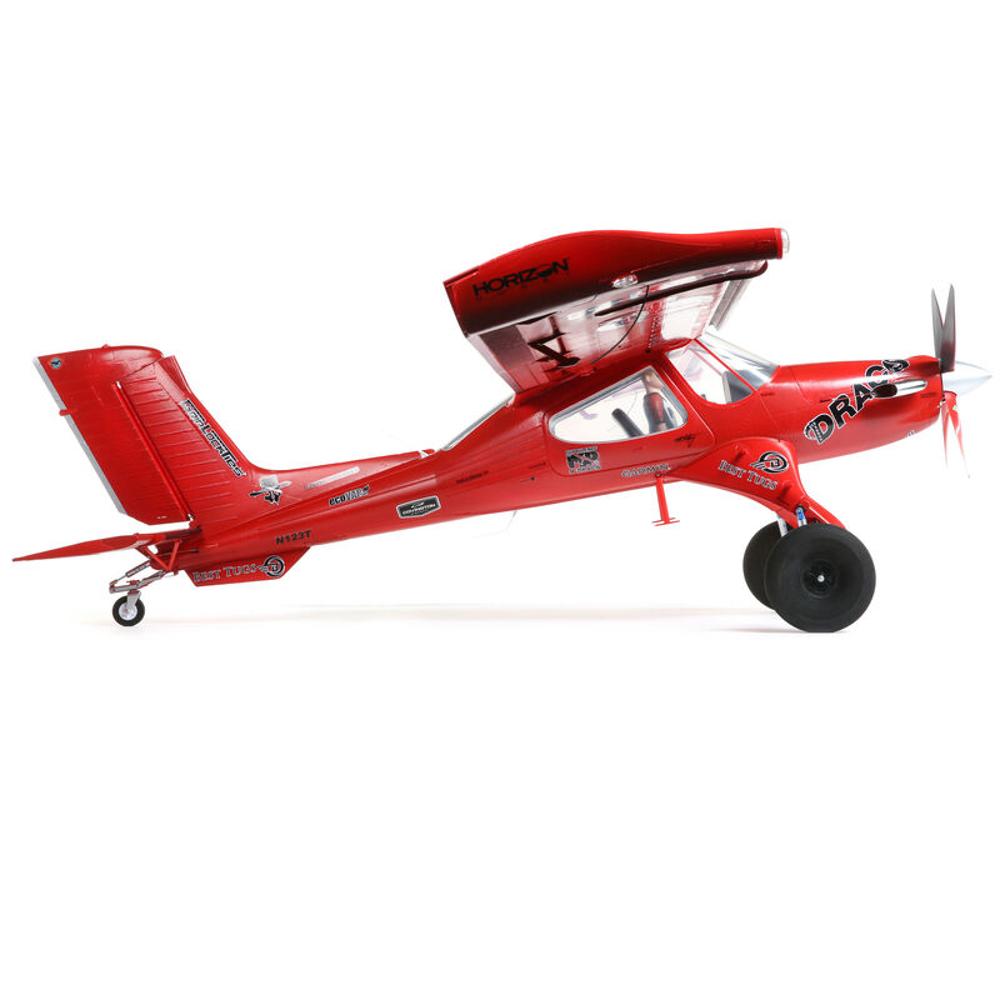 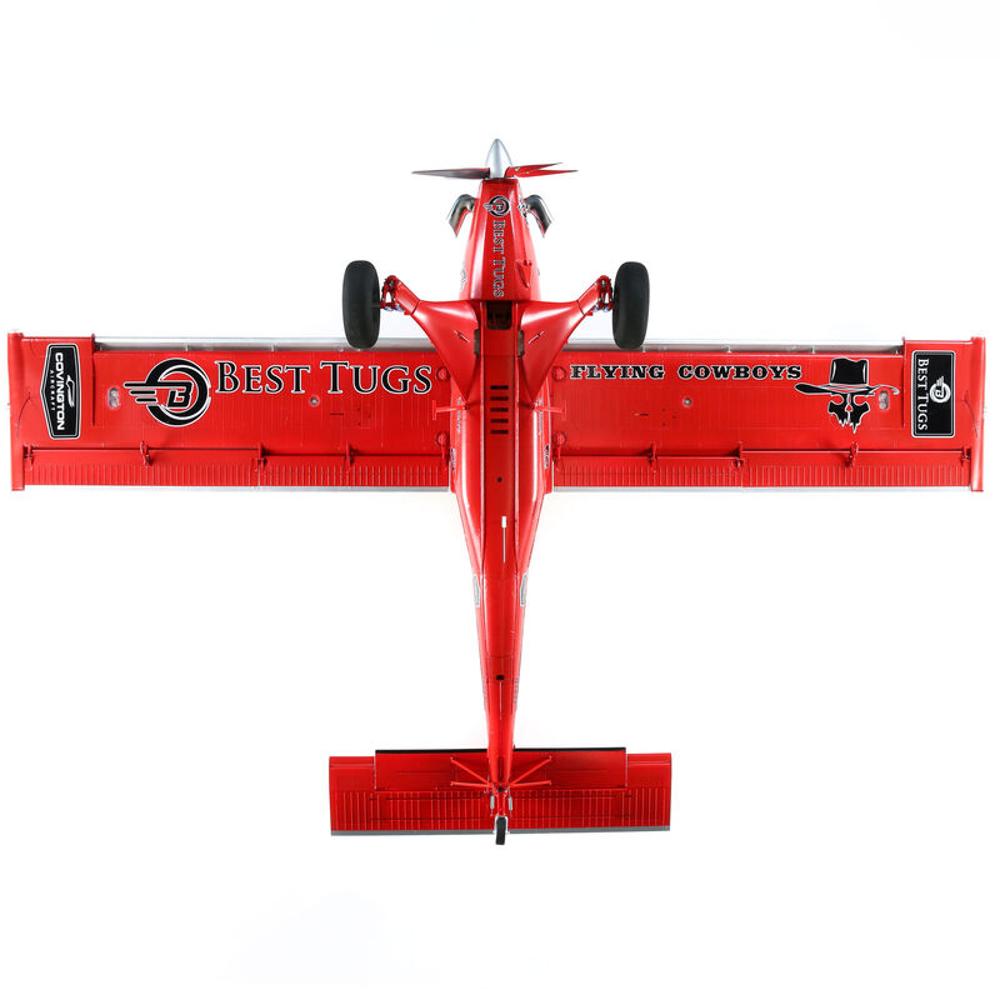 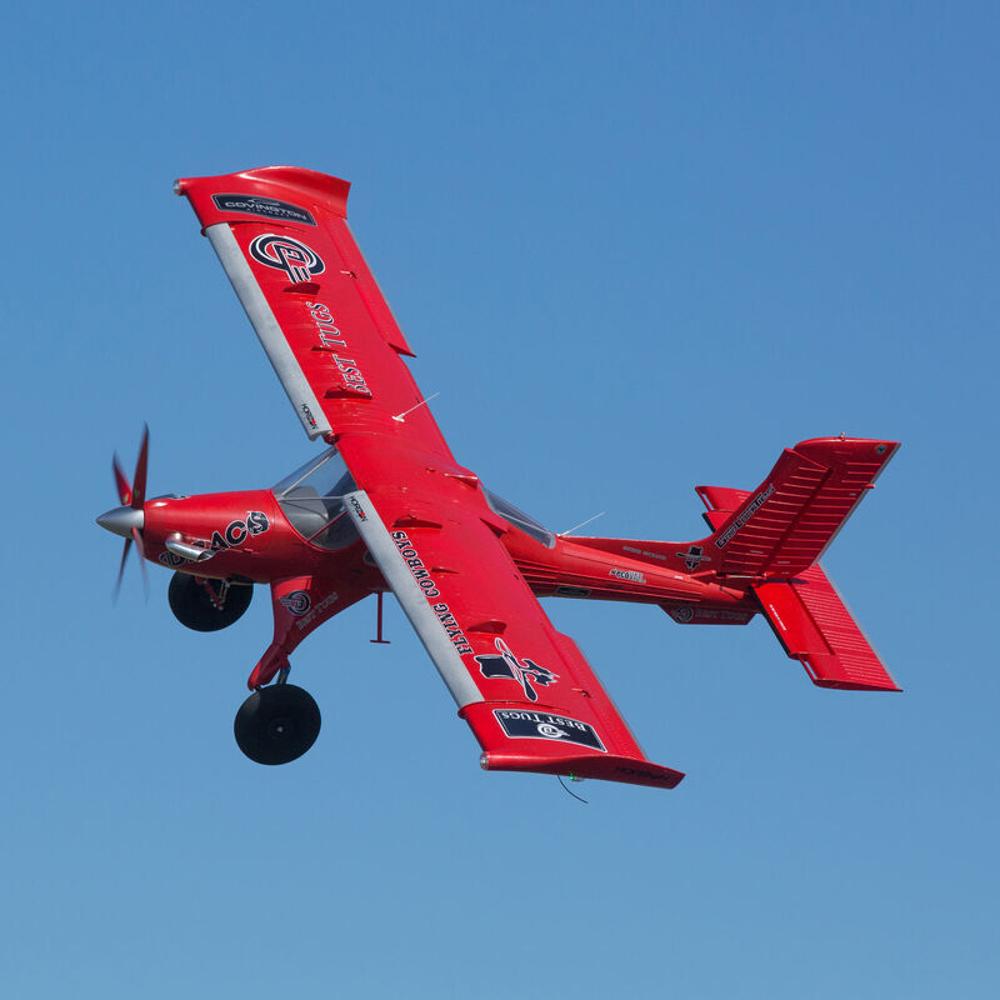 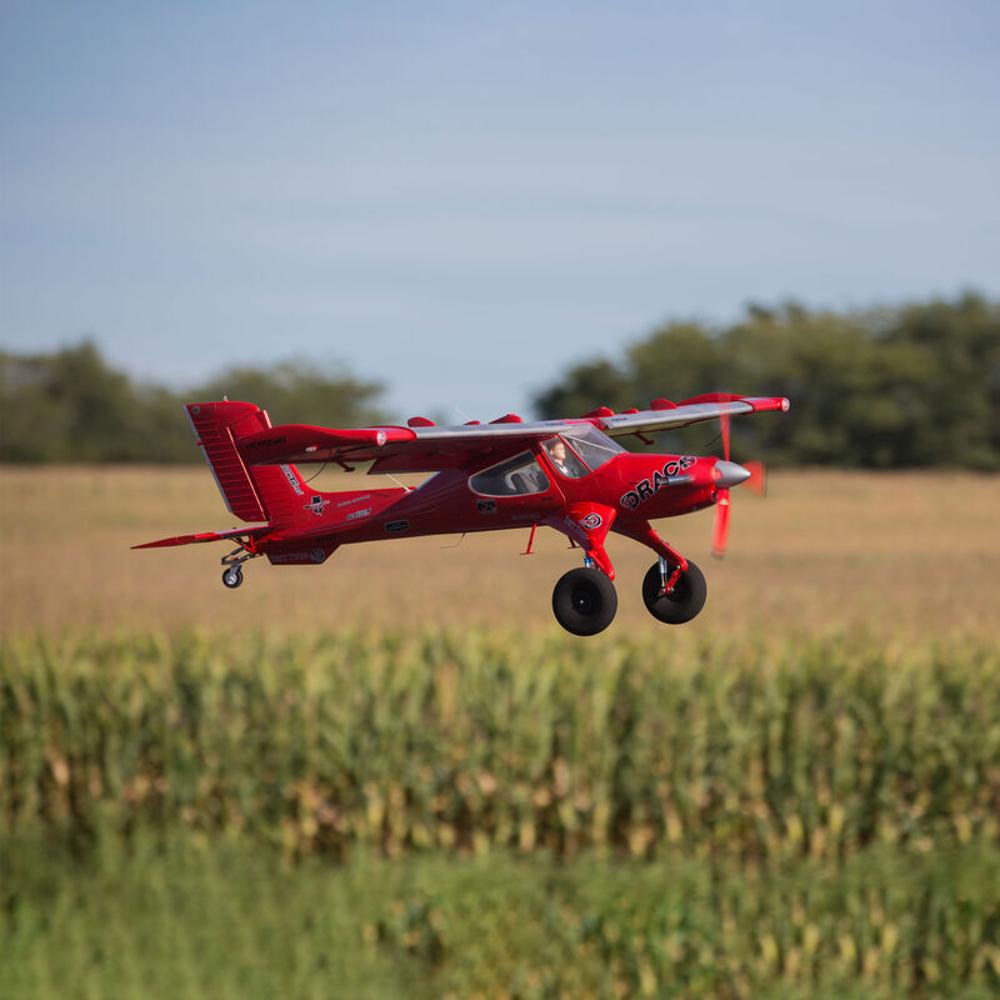 By most estimates, planning and building the full-size DRACO should have taken years. Entrepreneur Mike Patey - whose exceptional drive and Back to Work™ ethic have inspired thousands of people - accomplished it in just over five months! Mike started with a Wilga 2000, replacing its Lycoming O-540 piston engine with a Pratt & Whitney PT6A-28 turboprop boasting about twice the power at half the weight. Many additional modifications followed before Mike proudly unveiled his "ultimate bush plane". It could go to the same places as a Carbon Cub, but also climb twice as fast reach altitudes up to 28,000 feet and cruise cross-country at 180 MPH while carrying four people plus gear. Changes from the Wilga were so extensive that the FAA approved Mike's redesign as an experimental exhibition aircraft. The DRACO 2.0m is equally unique and astounding - and it's also one of the most highly-engineered, detailed and feature-rich E-flite® aircraft yet!

ABSOLUTELY ONE OF A KIND

Inspired by the incredible ingenuity and effort Mike Patey put into building the full-sized aircraft, E-flite® offers the only officially-licensed scale replica of the ultimate bush plane! The amazing DRACO 2.0m is one of the most highly-engineered, detailed and feature-rich RC models ever produced. Beyond its complex design and the accurate shape of its fully-molded, lightweight and durable EPO airframe with a factory-applied finish, it also features an abundance of Extra Scale details including a variety of surface features, steps, antennas, wingtip "stinger" skids, and much more. The clear windshield and windows offer an excellent view of the detailed cockpit with pilot figure and backlit instrument panel. Functional Extra Scale features include licensed, scale-like KING shocks on the main gear and tail wheel, leading-edge slats, slotted flaps and more. There are also a total of 17 LEDs throughout the airframe - with a custom controller that allows you to select solid, strobing and other light combination options from your transmitter. Oversized, tundra-style tires on the custom-made carbon fiber main gear soak up bumps and provide excellent prop clearance, while the shock-absorbing and steerable tailwheel offers improved ground handling - even when taxiing backward with the optional-use motor reversing (compatible Smart receiver and 7+ channel transmitter required for reversing).

Factory-installed, metal-geared servos with ball-link equipped and internal linkages deliver crisp, precise control. The high-power brushless outrunner motor can drive the scale 4-blade propeller with a wide range of 4000–7000mAh batteries, from a 4S pack for slow and smooth scale flight to 6S power for better-than-scale vertical performance. It's also equipped with a 100-amp Spektrum™ Avian™ Smart ESC, and the BNF® Basic version includes an AR637TA Smart receiver that delivers full-range telemetry including real-time battery voltage, current, motor RPM, ESC temperature, and more to compatible AirWare™ equipped transmitters. And even with its large-scale size and feature-packed design, the DRACO 2.0m can be flight-ready in less time than it takes to charge a battery! No tools are required for field assembly/disassembly because the two-piece wing is secured with quarter-turn thumbscrews. Best of all, if you've mastered flying at least one or two previous RC aircraft you can fly the DRACO 2.0m successfully, especially when taking advantage of the BNF® Basic version's exclusive AS3X® and optional-use SAFE® Select technologies. And it all adds up to offer an unmatched STOL (Short Take Off and Landing), scale and beyond flying experience unlike any other!

The Plug-N-Play® (PNP) version lets experienced modelers choose and use their own transmitter, receiver, battery and charger. The Bind-N-Fly® (BNF) Basic version includes a Spektrum receiver equipped with AS3X and optional-use SAFE Select technologies so intermediate to experienced modelers can use their own transmitter, battery and charger. An ULTIMATE Combo including the BNF Basic version airplane, a Spektrum transmitter, Smart battery, Smart charger, the special tools and glue you need for assembly - plus a copy of RealFlight Trainer Edition RC Flight Simulator - is also available and saves you more than $70 compared to purchasing all of the items separately.

Are you new to flying RC (Radio Controlled) aircraft? If you are, we recommend learning to fly with one of our purpose-built trainer aircraft such as the HobbyZone® Carbon Cub S 2. Based on the Carbon Cub flown by Mike's wife, Chandra Patey, it's equipped with exclusive and innovative SAFE technology that makes it possible for almost anyone to learn to fly successfully! The Ready-To-Fly (RTF) version includes everything needed to fly in one box and is the perfect choice if you're a new RC pilot.