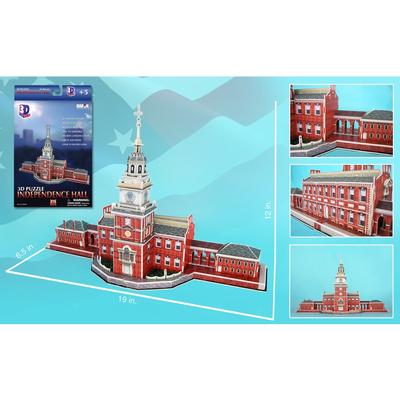 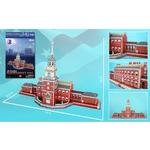 Located on Chestnut Street between 5th and 6th streets in Philadelphia, Independence Hall is the centerpiece of Independence National Historical Park which preserves several associated with the American Revolution.

Construction of Independence Hall began in 1732 under the guidance of Andrew Hamiltin, the Speaker of the Pennsylvania Assembly, who sought to provide a dignified setting for the Assemblys meetings which were previosuly held in private homes and taverns. It was the most ambitious public building in the thirteen colonies and construction was paid for as funds were available. For this reason it was not until 21 years later in 1753, that the building was considered complete. The five part plan included a 105 foot long main building, two covered arcades and two 50 foot long wing buildings. The three buildings together span a city block know as Independence Square. The bell tower, consisting of a wooden steeple at the top of the main three story brick house was the original home of the Liberty Bell and today holds the Centennial Bell created for the Unites States Centennial Exposition in 1876.

Independence Hall has sometimes been referred to as the birthplace of the United States.

From 1775 to 1783 (except for the winter of 1777-1778 when Philadelphia was occupied by the British Army) the Hall has served as the principal meeting place of the Second Continental Congress. It was in the Assembly Room that george Washington was appointed commander in chief of the Continental Army on June 14, 1775. On July 26 of the same year Benjamin Franklin was appointed the first Postmaster General. The Delcaration on Independence was drafted, debated and approved here before being signed on July 4, 1776. The design of the American flag was agreed to here in 1777 in the same room that the Articles of Confederation were adopted in 1781. In the summer of 1787 Independence Hall hosted the Philadelphia Convention, now known as the Constitutional Convention, where on September 17, 1787 the Constitution was completed.

Independence Hall is open to visitors year round with hours that vary by season.