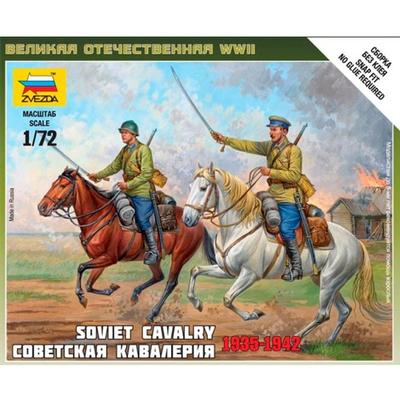 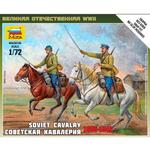 Model supplied unpainted. Assembly required. Models can be assembled individually, or combined onto the larger unit base. This snap fit kit can be assembled without glue. Includes unit flag and unit card for use with the Art of Tactic WWII game.

By World War II, the cavalry soldier was very much in its twilight as modern armies began to become mechanized. But, by the time of the German invasion, the Soviet Union still had thirteen divisions of cavalry. As the Red Army suffered disruption and losses in Operation Barbarossa, additional mounted infantry and cavalry units were called up to provide mobile reserves during the Battle of Moscow. Eventually, these horse units would be combined with armor units to create Cavalry Mechanized Groups in the fall of 1942.

The biggest advantage enjoyed by horsemen in the war was all-terrain mobility. Cavalry units could enter terrain that would hopelessly bog down armored vehicles, and could respond to changes in the battlefield much quicker than infantry units could.