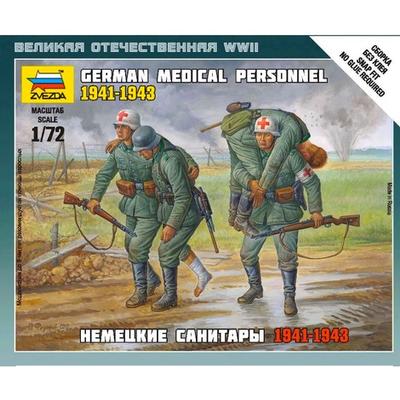 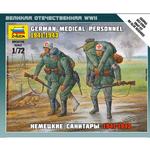 Models supplied unpainted. Assembly required. Models can be assembled individually, or combined using the larger unit base. This snap fit model can be assembled without glue. Includes unit flag and unit card for use with the Art of Tactic WWII game.

Throughout the history of warfare, one major concern has been dealing with soldiers wounded during fighting. Combat medics are, in many ways, the most heroic of soldiers: willing to face enemy fire and recover their wounded comrades so they can receive medical treatment. Most medics are only lightly armed for self-defense, relying primarily on the 1864 Geneva Convention prohibition against attacking medical personnel.

German Krankenträger were trained in advanced first aid. These teams were permanently attached to German infantry companies and were equipped with a red cross armband and a pistol for defense, as well as a kit with first aid and medical supplies. Each company was also assigned Sanitätsoffiziere, who were trained medical doctors, to provide immediate medical care.