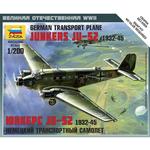 This kit includes one plastic model of a World War II German airplane and decal sheet. Model supplied unpainted. Assembly required. This snap fit model can be assembled without glue. Includes unit card for use with the Art of Tactic WWII game.

Because of the restrictions of the Versailles Treaty, Germany had difficulty developing military aircraft between the World Wars. Often, planes that were designed for civilian use were converted to military purposes. One such design was the versatile workhorse known as Tante Ju (Aunt Ju)the Junkers Ju-52. Built for usefulness but not for beauty, this reliable airplane would continue to serve until the 1980s.

This three-engine airplane served as both a troop transport and cargo plane throughout the entire war, and one variant even acted as a medium bomber. It was the standard aircraft for German airborne operations. It was built from reinforced corrugated duralumin and had a rectangular fuselage that could transport up to 18 troops. It could fly at speeds up to 265 kilometers per hour, with a range of about 870 kilometers.

The Ju-52 had little in the way of defensive armament, and could fly at only about half the speed of most fighter planes. As a result, they were very vulnerable to enemy aircraft and ground-based anti-aircraft guns.