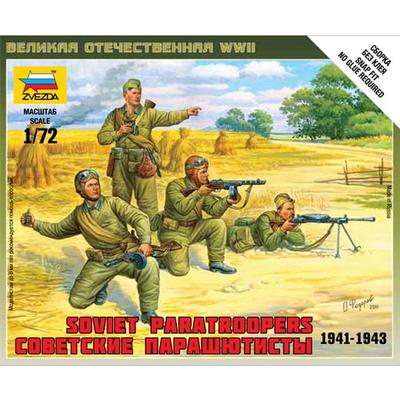 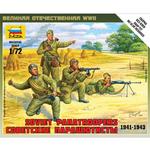 This kit includes four plastic model Soviet soldiers. Model supplied unpainted. Assembly required. Models can be assembled individually, or combined onto the larger unit base. Includes unit flag and unit card for use with the Art of Tactic WWII game.

The Soviet Union was actually the first country in the world to experiment with parachuting soldiers out of airplanes. In 1936, a 1200 man trial run was conducted near Kiev, which greatly impressed the foreign military observers on hand to see the event. Ironically, despite this head start, the Soviet Union rarely used paratroopers during the war.

By the time of the German invasion, the Soviet Union had five airborne Corps available. During the early fighting, a few small airborne drops were made by the Soviets, and larger efforts were made in 1942 and 1943. But for most of the war the airborne units were converted into Guards Rifle Divisions to reinforce the front lines