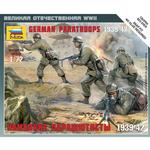 This kit includes four plastic model German soldiers. Model supplied unpainted. Assembly required. Models can be assembled individually, or combined onto the larger unit base. Includes unit flag and unit card for use with the Art of Tactic WWII game.

As soon as airplanes were able to carry passengers, military planners began to dream of using them to drop troops behind enemy lines. In Germany, highly trained units of Fallschirmjäger (meaning parachute hunters) were created, and were considered to be some of the most elite units in the Wehrmacht. Fallschirmjäger units were the first units in history to be used for large-scale airborne operations.

German paratroop units were given the finest weapons that the German military could provide, including early types of assault rifles, but the weight limitations of parachuting meant they could only be lightly armed. They formed the vanguard for many of the early invasions of the war, including Denmark, Norway, Belgium, and Crete. They were also used to defend critical points along the front throughout the entire war, earning them the nickname green devils from Allied forces.