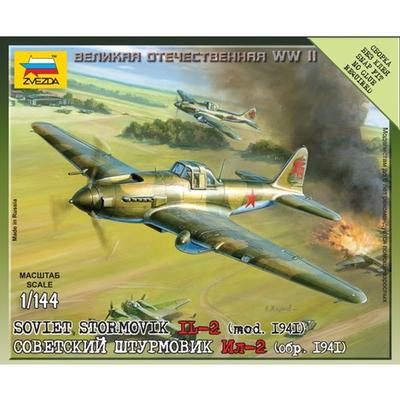 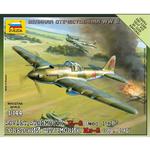 This kit includes one plastic model of a World War II Soviet warplane and decal sheet. Model supplied unpainted. Assembly required. This snap fit model can be assembled without glue. Includes unit card for use with the Art of Tactic WWII game.

Possibly the most produced military aircraft in history (with more than 42,000 built), the Ilyushin IL-2 Sturmovik (ground-attack aircraft, in Russian) was critical to the Soviet war effort in World War II. Called the Flying Infantryman by Red Army soldiers, it was a welcome sight when it arrived to destroy enemy vehicles. The IL-2 so terrified the German invaders, that they called it Schwarze Todthe Black Death.

The IL-2 was designed in 1938 by Sergey Ilyushin and entered production in 1941. It was equipped with formidable armor, making it difficult to shoot down. But, its heavy weight limited the size of its bomb load. The planes limited mobility also made it vulnerable to enemy fighter planes, and a modified version was produced starting in 1942 that added a rear-facing gunner with a 12.7mm machinegun.

Offensively, the IL-2 was equipped with a pair of 20mm cannon and a pair of 7.62mm machineguns. In addition, it could carry eight rockets or two bombs.