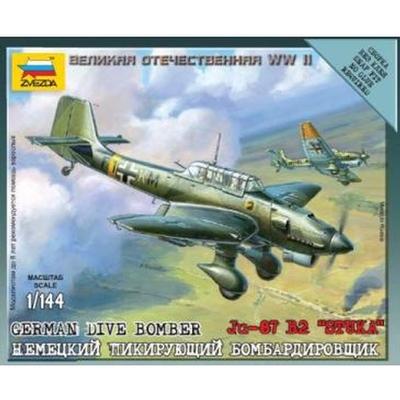 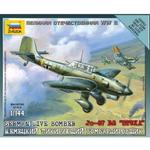 This kit includes one plastic model of a World War II German dive bomber and decal sheet. Model supplied unpainted. Assembly required. This snap fit model can be assembled without glue. Includes unit card for use with the Art of Tactic WWII game.

In many ways, the famous Junkers Ju-87 Sturzkampfflugzeug (dive bomber)better known by its nickname Stukawas the symbol of German air power during World War II. Created by Hermann Pohlmann in 1935, this deadly attack aircraft made its first appearance in the Luftwaffes Condor Legion during the Spanish Civil War. With its distinctive inverted gull wings, fixed landing gear, and wing-mounted Jericho Trumpet sirens, the mere sight of a Stuka struck fear in Germanys enemies.

The Stuka was designed to drop its payload as it reached the bottom of an almost vertical dive, which was controlled automatically by the airplanes mechanical systems. This allowed it to hit ground targets with remarkable accuracy. It also sported a pair of 7.92mm machine guns that it could use for strafing runs.

But while the Ju-87 featured innovative engineering, was sturdy, reliable, and very effective against ground targets, it was very vulnerable to fighter aircraft because of its poor maneuverability, slow speed, and lack of defensive weapons. During the war with the Soviets, as Germany lost air superiority, the Ju-87 proved too vulnerable to Soviet fighters, and was gradually replaced by the Focke-Wulf Fw 190.