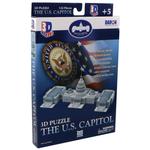 The most beautiful and famous landmarks in the world are now yours to have in your home. Incredibly detailed, fun to assemble and beautiful to display. Collect them all! This 132 piece US Capitol building 3D Puzzle is authentic in detail, museum quality with no glue required. This puzzle is easy to assemble with sturdy construction. Makes a great souvenir. 16.34" W x 7" D x 13.19" H Ages 5+.

The United States Capitol building is located in Washington D.C. on top of Capitol hill at the eastern end of the National Mall. It is among the most symbolically important buildings in the nation. In 1792 Secretary of State Thomas Jefferson and President George Washington proposed a design competition to solicit designs for the Capitol. The prize was to be $500 and a city slot. Unfortunately none of the plans submitted within the time frame of the competition were satisfactory and such none were chosen. A late entry made by William Thornton, an amateur architect was praised by both Thomas Jefferson and President Washington who was enamored with its "Grandeur, Simplicity, and Beauty".

Though there were some changes made to Thorntons original plans, construction of the Capitol began on September 18, 1793 with President Washington laying the cornerstone. Not long after the completion of both wings of the building the Capitol was set on fire by British troops during the War of 1812. Reconstruction of the damage began in 1815 and further construction continued through 1864. Since that time there have been many construction phases, leading us to the architecturally impressive building we have today.

After two centuries the Capitol building still serves as the meeting chambers fot the Senate and the House of Representatives and is one of the most recognizable historic buildings in Washington. With its 540 rooms divided among five levels the Capitol covers a ground area of 175,170 square feet and has about 16.5 acres of floor area. It stands not only as a focal point of the legislative branch but also as a centerpiece of Capitol hill.