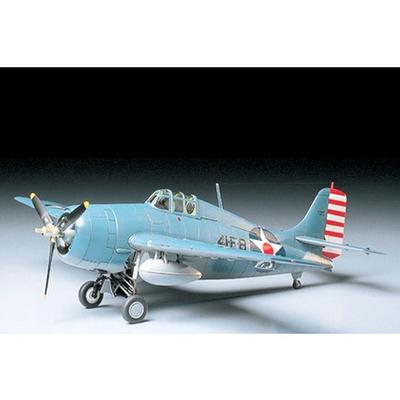 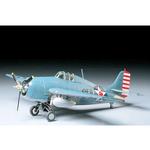 This is a Plastic 1/48 WWII Grumman F4 Wildcat Airplane from Tamiya.

At the onset of the Pacific War in December 1941, the Japanese Navy A6M Zero fighter was the dominant aircraft successful against the allied air forces. The Zeros attempt at total superiority was thwarted by numerous F4F Wildcat fighters flown from U.S. aircraft carriers.

Grumman Aviation produced the G-18, the prototype XF4F-2, which first flew in September 1937. Initial evaluation revealed several performance problems, which led the U.S. Navy to reject the G-18 in favor of the Brewsters F2A "Buffalo". The Navy asked Grumman to continue with the project, and resulted in the G-36, which flew in February 1939. The G-36 tests exceeded the performance of the F2A, resulting in the U.S. Navy approving the design and ordering it into production as the F4F-3 Wildcat. Two yeas following its deployment, during the critical stages of the Pacific War in 1942, the improved F4F-4 Wildcat was introduced. It had folding wings, and three 12.7mm machine guns in each wing, plus the more powerful 1,200 P & W R-1830-86 Twin Wasp engine, giving it a speed of 512km/h. Grumman became known as the "Ironworks" due to its strongly designed aircraft, which could absorb enormous punishment and still fly home.

Although the F4F was inferior in many respects to the Zero, a superb kill ration was attained by Wildcat pilots by using its strong points against the Zeros weak point of fragility and unseasoned pilots.

COMMENTS: Although the F4F-4 had folding wings, this kit does not come with the option to fold the wings. This would take considerable scratchbuilding to do properly.