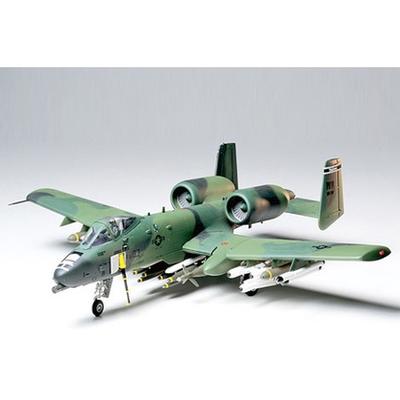 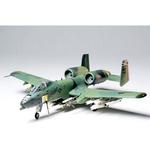 The need for close air support, on small pin point targets, was recognized early during the Vietnam conflict. Following an experimental development program begun in the early 1970's, the Fairchild Republic Industries A-10 Thunderbolt II was selected for production. The performance characteristics demanded were for operation on unimproved short fields, both high and low airspeed maneuverability, easy maintenance, long loiter times and range, excellent pilot protection, and a capacity for large mixed weapons loads.

The appearance of the A-10 is remarkable while its performance is amazing. Known affectionately as the "Wart Hog" by its pilots, it's a large single seat aircraft, identified by a pair of TF-34-100A high bypass fan jet engines mounted high near the rear of the twin tailed fuselage. A few of the specifications are: Length 53' 4" height 14Ǝ", span 57ƌ" maximum gross weight 47,400lbs, including 16,000lbs of external stores. Internal armament is the GAU-8/A 30mm Gatling cannon capable of 2100 or 4200 rounds per minute. It carries 1350 rounds of ammunition, a fire control head-up display, CRT TV monitor, laser spot seeker plus a diversified armament panel that can facilitate any operational need. The A-10 has been around since 1972, and has again proven its worth during the recent Gulf war.

COMMENTS: &nbspDue to small parts that could cause a choking hazard please keep away from children 3 years of age and younger