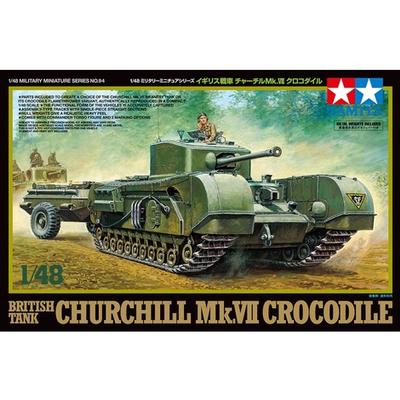 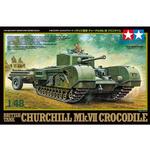 This is a 1/48 scale plastic assembly kit model of the British Tank Churchill Mk.VII Crocodile.

The Churchill design was the result of a chastening experience for British forces in early WWII, a more modern design that could be produced quickly to make up for armor shortfalls after the Dunkirk evacuations.

The Mk.VII variant was up-gunned with a 75mm gun and had improved armor up to 152mm thick! The Crocodile is one of the most notable special variants of the Churchill. It had an 80-plus meter range flamethrower in place of the front machine gun, towing its fuel and compressed nitrogen propellant in a trailer behind.

Features marking options for one Crocodile and one Mk.VII infantry tank.