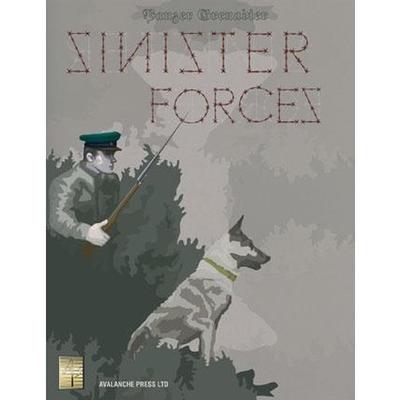 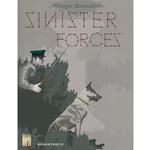 The four years of brutal warfare on the Eastern Front brought the political troops of both sides into front-line fighting.

Formed to control civilians rather than fight armed enemies, the Soviet NKVD and the much larger German Waffen SS each committed mass murders in the name of ideology and from simple animal barbarism. Knowing their well-deserved fate if captured, they often fought with suicidal fanaticism.

Sinister Forces brings background articles and scenarios covering these troops and their battles to the Panzer Grenadier game system. It is not playable by itself, but requires Eastern Front to play most of the scenarios, and Afrika Korps or Desert Rats to play all of them. This is a book supplement complete with a full set of die-cut and mounted counters, much like Great War at Sea: Dreadnoughts.

Scenarios take place on the Eastern Front. The SS troops are of generally lower quality than the corresponding German Army pieces of Eastern Front, reflecting the lower standards of training and recruitment for these political formations. Background articles place the scenarios in the full context of the war in Russia.

There are SS units included of high combat value: special pieces and scenarios for the Norwegian ski battalion and for the Finnish SS battalion.

By contrast, the NKVD troops are of generally higher quality than the Red Armys rank-and-file. Though used like the SS to murder the regimes opponents, its suspected opponents, and other people for no particular reason, NKVD troopers served longer than their army counterparts and had more training behind them. They usually fought well when deployed against the Germans, but lacked artillery, tanks and heavy weapons.

Gentleman scholar Greg Guerrero, an expert on the Soviet military, provides the background commentary for Stalins political army. Both the NKVD "field army" and the elite commandos of OMBSON are covered as is the Soviet partisan movement, with new counters for Partisans and scenarios for their use.