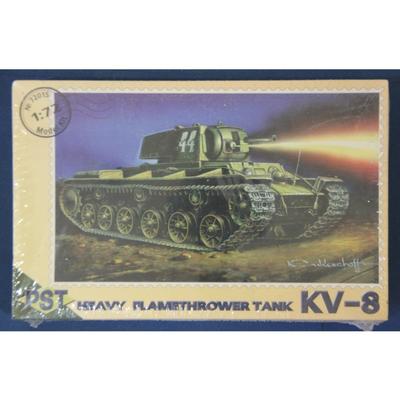 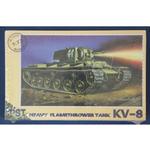 The KV series were known for their extremely heavy armour protection during the early part of the war, especially during the first year of the German invasion of the Soviet Union.

They were almost completely immune to the 3.7 cm KwK 36 and howitzer-like, short barreled 7.5 cm KwK 37 guns mounted respectively on the early Panzer III and Panzer IV tanks fielded by the invading German forces. Until better guns were developed by the Germans it was often the case that the only way to defeat a KV was with a point-blank shot to the rear.

Prior to Operation Barbarossa (the German invasion of the USSR), about 500 of the over 22,000 tanks then in Soviet service were of the KV-1 type. When the KV-1 appeared, it outclassed the French Char B1, the only other heavy tank in operational service in the world at that time. Yet in the end it turned out that there was little sense in producing the expensive KV tanks, as the T-34 medium tank performed better (or at least equally well) in all practical respects. Later in the war, the KV series became a base for development of the IS (IS - Josif Stalin) series of tanks.

Initially known as Little Turret and Big turret, the 76-mm-armed tank was designated as the KV-1 Heavy Tank and the 152 mm howitzer one as KV-2 Heavy Artillery Tank.

The KVs strengths included armor that was impenetrable by any tank-mounted weapon then in service except at point-blank range, that it had good firepower, and that it had good traction on soft ground. It also had serious flaws: it was difficult to steer, the transmission (which was a twenty year old Caterpillar design) was unreliable (and was known to have to be shifted with a hammer), and the ergonomics were poor, with limited visibility and no turret basket. Furthermore, at 45 tons, it was simply too heavy. This severely impacted the maneuverability, not so much in terms of maximum speed, as through inability to cross many bridges medium tanks could cross.The KV outweighed most other tanks of the era, being about twice as heavy as the heaviest contemporary German tank. KVs were never equipped with a snorkeling system to ford shallow rivers, so they had to be left to travel to an adequate bridge. As applique armor and other improvements were added without increasing engine power, later models were less capable of keeping up to speed with medium tanks and had more trouble with difficult terrain. In addition, its firepower was no better than the T-34. It took field reports from senior commanders "and certified heroes", who could be honest without risk of punishment, to reveal "what a dog the KV-1 really was."

While initially the Soviets made a lot of poor defense decisions, worsened by recent "cleansings" of Soviet military command, the KV-1 was unlike anything the German army had expected to encounter, and some of the battles against numerically superior Axis forces became legendary. Even though the operations of the KV family of tanks were severely hampered by restrictions due to its weight, it was a fearsome and formidable weapon through most of the Second World War.A new heavy tank design entered production late in 1943 based on the work done on the KV-13. Because Kliment Voroshilov had fallen out of political favour, the new heavy tank series was named the Josif Stalin tank, after Josif (Joseph) Stalin. The KV-13 programs IS-85 prototype was accepted for production as the IS-1 (or IS-85, Object 237) heavy tank. After testing with both 100 mm and 122 mm guns, the D-25T 122 mm gun was selected as the main armament of the new tank, primarily because of its ready availability and the effect of its large high-explosive shell when attacking German fortifications. The 122mm D-25T used a separate shell and powder charge, resulting in a lower rate of fire and reduced ammunition capacity. While the 122mm armour piercing shell had a lower muzzle velocity than similar late German 7.5 cm and 8.8 cm guns, proving-ground tests showed that the 122mm AP shell could defeat the frontal armour of the German Panther tank, and the HE shell would easily blow off the drive sprocket and tread of the heaviest German tank or self-propelled gun. The IS-122 replaced the IS-85, and began mass production as the IS-2. The 85 mm gun saw service in the lighter SU-85 and T-34-85.