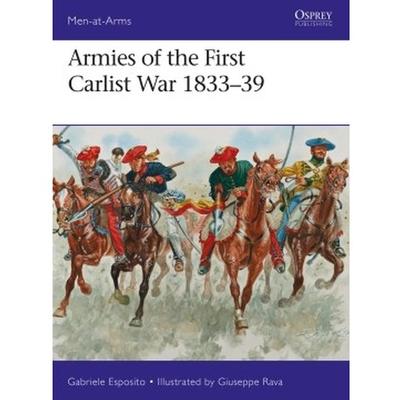 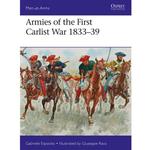 The First Carlist War broke out after the death of King Ferdinand VII, the king restored at the end of the Peninsular War thanks to Wellingtons victory. The crown was claimed by both his daughter Isabella, backed by the Liberal party and his brother Don Carlos, at the head of northern ultra-conservatives centred in the Basque provinces and Navarre. The Liberals or Cristinos were supported by a 10,000-strong British Legion of volunteers led by a former aide to Wellington as well as the British Royal Navy, a Portuguese division, and the French Foreign Legion. With both armies still using Napoleonic weapons and tactics, early victories were won by the Basque general Zumalacarregui. After his death in 1835 a see-saw series of campaigns followed, fought by conventional armies of horse, foot and guns, supported by many irregulars and guerrillas.

This little known multi-national campaign provides a fascinating postscript to the Peninsular War of 1808-14, and its uniforms present a colourful and varied spectacle.

Gabriele Esposito is an Italian researcher and a long-time student of military history. His main field of research is the military of 19th-century Latin America, but his interests range from the Ancient world to modern post-colonial conflicts. He has published several works in the UK, including MAA 499 Armies of the War of the Triple Alliance 1864-70 and MAA 504 Armies of the War of the Pacific 1879-83, and is a regular contributor to many specialized magazines.