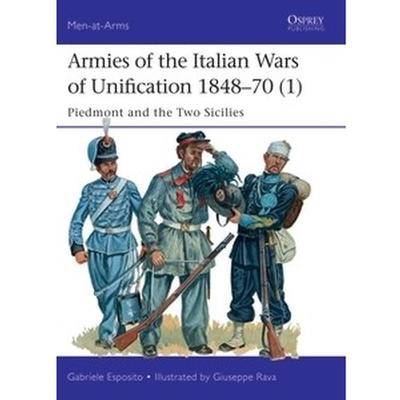 PIEDMONT AND THE TWO SICILIES

In the 1840s, post-Napoleonic Italy was a geographical expression - not a country, but a patchwork of states, divided between the Austrian-occupied north, and a Spanish-descended Bourbon monarchy, who ruled the south from Naples. Two decades later, it was a nation united under a single king and government, thanks largely to the efforts of the Kings of Sardinia and Piedmont, and the revolutionary Giuseppe Garibaldi. This book, the first of a two-part series on the armies that fought in the Italian Wars of Unification, examines the Piedmontese and Neapolitan armies that fought in the north and south of the peninsula. Illustrated with prints, early photos and detailed commissioned artwork, this book explores the history, organization, and appearance of the armies that fought to unite the Italian peninsula under one flag.

Gabriele Esposito is an Italian researcher and a long-time student of military history. His main field of research is the military of 19th-century Latin America, but his interests range from the Ancient world to modern post-colonial conflicts. He has published several works in the UK, including MAA 499: Armies of the War of the Triple Alliance 1864-70 published in March 2015, and is a regular contributor to many specialized magazines.