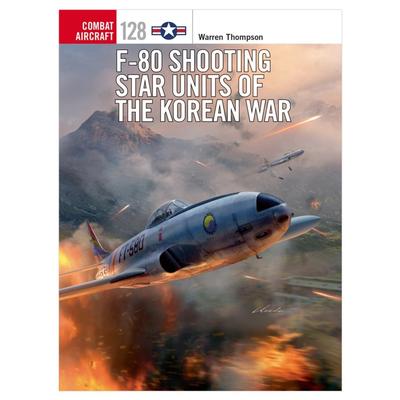 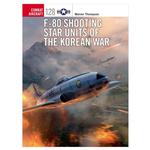 Built within a 180-day time limit in 1943, the F-80 Shooting Star first saw service in Italy in the final year of World War 2, and consequently was sent to bases in the US, Europe and the Far East after VJ Day.

It was the latter groups based in Japan that initially bore the brunt of the early fighting in Korea, engaging MiG-15s in the worlds first jet-versus-jet combat.

Flown principally by the 8th and 49th Fighter Bomber Wings, the F-80 served until the end of the war, completing an astonishing 98,515 combat sorties, shooting down 17 aircraft (including three of the vastly superior MiG-15s), dropping over 33,000 tons of bombs, and firing over 80,000 air-to-ground rockets. Aside from the fighter-bomber Shooting Stars, the ultra-rare, but heavily used, photo-reconnaissance RF-80A saw extensive use in the frontline in Korea as a replacement for the vulnerable RF-51D.

Filled with first-hand accounts and rare colour photographs taken by the veterans themselves, this is the engrossing story of the pioneering F-80 Shooting Star.

Warren Thompson has had numerous books and magazine articles published over the past 30 years. His interest in the Korean War has spanned almost this entire length of time. Thompson has written more than 15 books for Osprey since 1990. He lives in Germantown, Tennessee.

Jim Laurier is a native of New England, growing up in New Hampshire and Massachusetts. He has been drawing since he could hold a pencil and throughout his life he has worked in many mediums creating artwork on a variety of subjects. He has worked on the Osprey Aviation list since 2000 and in that time he has produced some of the finest artwork seen in these volumes. He has specialised in aircraft of the Vietnam War period. He lives in New Hampshire.