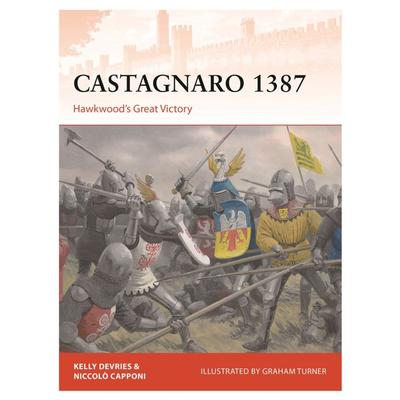 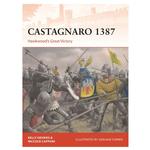 The battle of Castagnaro, fought on 11 March 1387 between the Veronese and the Paduans, is one of the most famous Italian medieval conflicts in the English-speaking world. This is thanks in no small part to the exploits of the renowned English mercenary (or condottiero) captain, Sir John Hawkwood. Commanding the Paduan army, he led them to a stunning victory.

This new study challenges the conventional story of the battle, relocating it to the other side of the Adige River, and showing that Hawkwood was no mere disciple of his previous commander, the Black Prince-he was a highly talented and intelligent general in his own right. Using specially commissioned full-colour artwork, this fascinating book shows how Hawkwood used his own acumen, and the training, skills, and discipline of his very experienced condottieri, to defeat his opponents at Castagnaro.

Kelly DeVries holds a PhD from the Centre for Medieval Studies at the University of Toronto. He is professor of history at Loyola University Maryland and has most recently written Medieval Weapons: An Illustrated History of their Impact (2007) and The Artillery of the Dukes of Burgundy, 1363-1477 (2006), both with Robert Douglas Smith. His other books include: Medieval Military Technology (1992) Infantry Warfare in the Early Fourteenth Century: Discipline, Tactics and Technology (1996) The Norwegian Invasion of England in 1066 (1999) Joan of Arc: A Military Leader (1999) A Cumulative Bibliography of Medieval Military History and Technology (2002 updated 2005) and Guns and Men in Medieval Europe, 1200-1500: Studies in Military History and Technology (2002), as well as several edited works. In addition he is the author of more than 60 articles on military history and the history of military technology. He currently edits the Journal of Medieval Military History and is the series editor for the History of Warfare series of Brill Publishing.

Count Niccolò Capponi is a part of Florences living history. His family has been in the city since the thirteenth century and he is a historian. After earning a PhD in military history from the University of Padova, he returned to Florence where he currently teaches political science and the history of Florence to Americans studying abroad. He is, most recently, author of Victory of the West: The Story of the Battle of Lepanto, as well as I legionari rossi: Le brigate internazionali nella guerra civile spagnola 1936-1939, a history of the international brigades during the Spanish Civil War.